Electric vehicle start-up Rivian Automotive (RIVN -1.75%) came public with a lot of fanfare in late 2021, soaring to a market valuation above $120 billion shortly after its IPO. However, the stock has since cratered by more than 80% from its peak. It seems clear that electric vehicles are poised to play a significant role in the industry moving forward, so some investors might be looking at that decline as a potential buying opportunity.

Consider these five red flags before putting your hard-earned money into the stock. Rivian has a lot of challenges to overcome, and a potentially bumpy road ahead.

Tesla CEO Elon Musk once explained the difficulties of mass-producing vehicles by saying that “building the machine that makes the machine” was one of his company’s most complex challenges.

Rivian is finding that out, too. It began producing EVs in 2021, delivering 1,015 vehicles that year, primarily its R1T electric pick-up trucks. It’s also building electric delivery vans for Amazon, an early Rivian investor.

However, the whole manufacturing world is working through supply chain headaches, and Rivian has already disappointed the market by guiding for production of 25,000 vehicles in 2022, far lower than some previously expected. Rivian reaffirmed that target in its Q1 shareholder letter, but it only produced roughly 4,000 vehicles through the first four months of the year.

Rivian’s production levels are critical because they significantly impact how much money the company loses. Factories are costly to own and operate, and can generate serious losses when they are running well below capacity. 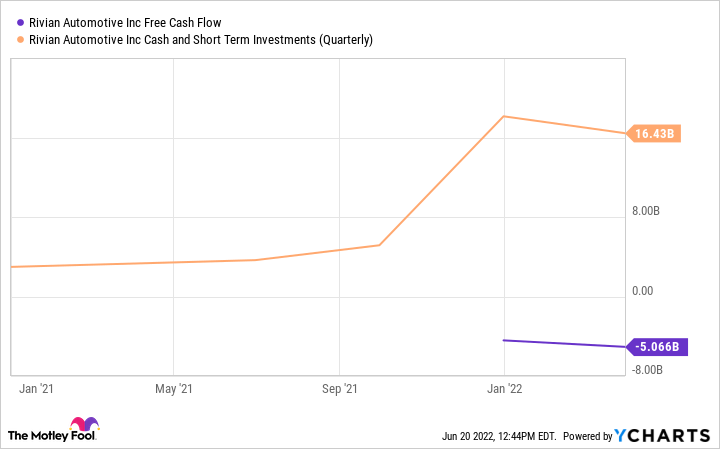 Rivian has about $17 billion in cash and equivalents on its books now — the remaining proceeds from its 2021 IPO. However, it’s burning through billions, as its negative free cash flow illustrates. Management has stated that its current cash position should last it through 2025, but that could change if it struggles to get production ramped up.

The Rivian R1T arguably targets the premium truck market based on its starting price of $67,500. The company touts 90,000 preorders for the vehicle, and given that those entail $1,000 deposits, they do indicate a serious intention to buy. Still, it’s fair to question how many of these orders will stick.

There is increasing worry that a recession is on the way. If one arrives, it would be expected to curb consumer spending. As lower-priced competing EV trucks hit the market — including Ford’s F150 Lightning, which starts at just $40,000 — a tough economy could pull some consumers away from Rivian, especially if production struggles drag out delivery schedules.

Ford was a significant investor in Rivian, partnering with the company in 2019 and investing a total of $1.2 billion. But that initial alliance has slowly faded. Ford announced last year that it was no longer working with Rivian, touting its plans to support its own EV ambitions with in-house technology.

The company has also begun selling its stake in Rivian. In a  pair of sales last month, it divested itself a total of 15 million shares to bring its stake to just under 10%.

The breakup has cost Rivian a strategic partner, and Ford’s decision to sell the EV maker’s stock at less than $30 per share — far removed from its peak — is one that investors should reflect on before buying in themselves.

Most of these concerns are short-term focused, but they add up to a big long-term question: When will Rivian be profitable? Industry pioneer Tesla went public in 2008 and didn’t generate steady net income until 2020. Furthermore, Tesla built its business when there was less competition in the EV space, an expanding economy, and cheaper access to capital. Rivian is not the first mover that Tesla was, but is instead trying to separate itself from a growing pack of competitors trying to find their footing.

Its shares have fallen dramatically, making the stock more attractive than it was at more than $100, but a low stock price doesn’t guarantee a good return on investment. Rivian has a lot of short- and long-term questions to answer, and investors should consider all of them before putting money into its stock.