Companies in the electric vehicle (EV) sector are back in vogue with investors today, and several tied to the electrification of the commercial truck industry are leading the way. Shares of Nikola (NASDAQ:NKLA), Hyliion Holdings (NYSE:HYLN), and battery company Romeo Power (NYSE:RMO) were up 3.9%, 10.3%, and 9.2%, respectively, as of 3:28 p.m. ET. And the gains come as the underlying businesses are also starting to get traction.

While today’s moves are in line with a more general push into EV stocks by investors, some of the confidence in these names is likely coming from recent progress with the businesses. Nikola recently made good on its promise to begin shipping its Tre battery electric truck to customers before the end of the year. And Hyliion said last month that it already has reservations from fleet owners for its combination renewable natural gas and battery-powered electric truck, the Hypertruck ERX. 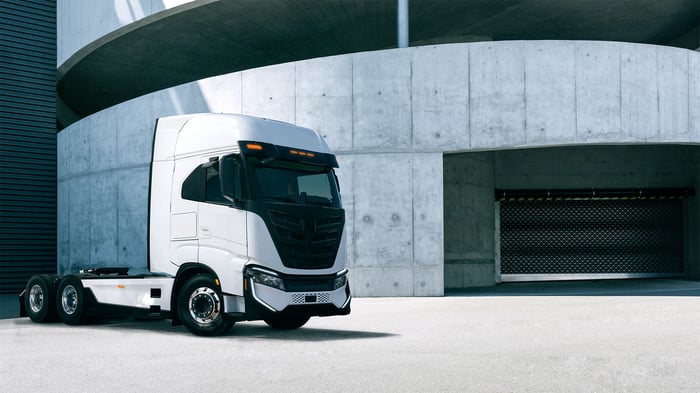 These EV companies focusing on the commercial semi truck fleet business have had a difficult time gaining confidence from investors. The stocks of these three companies have lost between 43% and 53% in the last six months. But some recent progress has gained new attention.

Nikola is still trying to regain its reputation among investors after its founder and former chairman was forced out last year for misrepresenting the company’s progress. But the company has sent its first electric trucks to California-based logistics provider Total Transportation Services (TTSI), as it said it would do prior to the end of 2021. TTSI will conduct a pilot test of two Tre trucks, as well as a pair of Nikola’s hydrogen fuel-cell electric vehicles, at its Los Angeles and Long Beach port operations. That in itself gave the stock a boost when it was announced earlier this month.

Nikola also announced it finalized a civil penalty settlement with the Securities and Exchange Commission stemming from its former executive’s actions. The $125 million settlement will be paid in five installments over two years, which seems to have satisfied investor angst over the issue.

These companies are still a long way from making any money, of course. Hyliion has lost more than $66 million through the first nine months of 2021, but it still had $289 million in cash and equivalents on its balance sheet through Sept. 30. And Romeo Power only generated less than $6 million in revenue in its third quarter.

But many investors see potential for the electrification of both the short- and long-range trucking industry using various technological approaches. Investors are closing the year out adding to positions in these names today, producing solid gains.

How To Mine Metals From Electric Car Batteries | World Wide Waste