Lucid, Rivian, and Tesla Are Just the Tip of the EV Stock Iceberg | The Motley Fool


Seemingly every month, a legacy automaker makes an announcement outlining bold plans to decarbonize its operations by investing in electric vehicles (EVs). Simultaneously, we’ve seen plenty of new players enter the space, including Chinese automakers like Nio (NYSE:NIO) and U.S. players like Lucid Group (NASDAQ:LCID) and Rivian Automotive (NASDAQ:RIVN). A few years ago, Tesla (NASDAQ:TSLA) seemed like the only true EV investment opportunity. Today, the industry feels more crowded and competitive than ever before.

If you’re wondering how to navigate the noise with sound investment ideas, you’ve come to the right place. Here’s the latest on Lucid and Rivian, what makes Tesla unique, and some other investment ideas worth considering now. 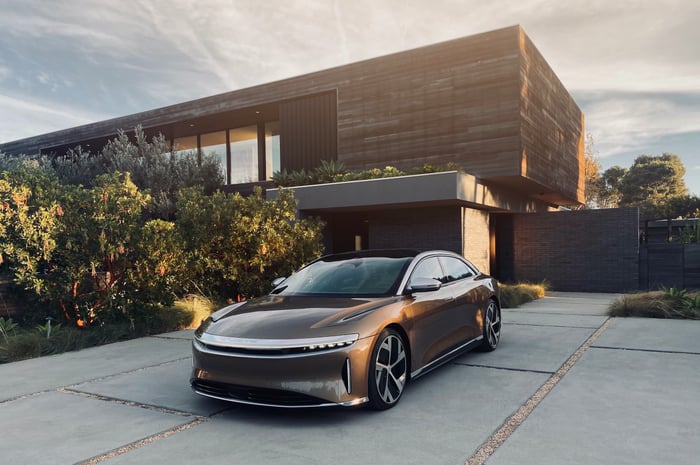 Lucid and Rivian have plenty in common. They both have a lot of cash, impressive technology, ambitious plans to disrupt the industry, and are very expensive stocks.

Lucid’s competitive advantage is its battery technology, which has allowed it to achieve a longer range and faster charging from a compact configuration. Its battery efficiency of more than 4.5 miles per kilowatt hour is higher than the 4 miles/kWh of Tesla’s Model S and other luxury sedans. Lucid stock was the best performing among automakers in 2021 mainly because it delivered on its major promises.

Lucid’s initial range and horsepower projections for its Air Dream Edition were met with skepticism. But then the Environmental Protection Agency (EPA) rated the long-range version of the Air Dream Edition with a better-than-expected 520 miles of range and 933 horsepower, and the performance version of the Air Dream with an estimated range of 471 miles and 1,111 horsepower. This stamp of approval was just one factor of many that made the industry take Lucid seriously. It has expanded its manufacturing capacity, has over 17,000 reservations for its Air line, and plans to expand capacity even further while rolling out lower-priced Air versions in 2022.

Like Lucid, Rivian has a large existing manufacturing capacity, plans to expand in the years ahead, and has strong demand for its vehicles. The company is looking to disrupt the electric van, truck, and SUV market. Although it began deliveries in the third quarter, the results came in lower than Rivian had guided for. However, a bright spot was that pre-orders for its R1T truck now stand at over 71,000, and that’s on top of R1S reservations and the 100,000 delivery vans Amazon pre-ordered.

Rivian was awarded the Motor Trend 2022 Truck of the Year award and Lucid received the Motor Trend 2022 Car of the Year award. Investing in either company is a bet that their technology will hold up as new players enter the space, that they will grow production over time, and one day achieve consistent positive operating cash flow and profitably. It’s a tall order, which is why both companies are some of the highest-risk options in the industry.

A dynasty far from decline

Despite the potential of companies like Lucid and Rivian, the idea that either is the “next Tesla” is doubtful. Tesla is the industry leader and is probably going to remain the most valuable automaker for decades to come.

Its invaluable first-mover advantage, incredible technology, and years making mistakes (and learning from them) have made it a battle-hardened veteran with one of the highest operating margins in the industry. Put another way, Tesla may not produce the most cars, but it does convert more revenue into actual profit than its competitors. Its renewable energy and energy-storage segments are growing and also very profitable. In sum, betting against Tesla is a bad idea, especially if the company continues to retain its high profitability even as it grows revenue at a breakneck pace.

Less limelight, but lots of potential

The EV industry is so much more than new automakers or Tesla becoming even bigger. Lucid and Rivian will also have to compete against a crowd of legacy automakers backed by much larger workforces and capital. Make no mistake, these companies are not just going to sit idly by and watch newcomers gobble up market share that took them decades to build.

The legacy automaker that has arguably done the best job fostering real change is Ford (NYSE:F). It may surprise you to learn that Ford stock more than doubled in 2021, making it the second-best performing automaker behind Lucid for the year. Its new management team is keen on investing heavily into EVs to dominate the electric truck industry and compete in electric SUVs — and it’ll soon be making its own batteries and producing vehicles at its new mega factories in Tennessee and Kentucky.

Another way to invest in the EV industry is through infrastructure companies like ChargePoint (NYSE:CHPT), the largest Level 2 (240 volt) charging network in North America. It’s quickly growing its Level 3 DC fast-charging network, and continues to look for ways to monetize its subscription business. Although ChargePoint’s growth and path to profitability are attractive, some investors may prefer to go with a basket of EV charging stocks.

Zoom out and focus on the big picture

Real gains aren’t made when a company beats a single quarter’s estimates. Rather, they are made over the long term as new companies evolve into paradigm-shifting growth stories that go on to define an industry. That’s exactly what Tesla did to the auto industry. And while there may never be another company quite like it, the auto industry has a very good chance of looking much different a decade from now than it does today.

An investor’s task is to determine which companies have the best chance of succeeding and avoid those that aren’t making the necessary capital commitments to prepare their businesses for the future.

It isn’t hard to envision an EV stock like Lucid taking market share from today’s leading luxury sedan makers. Or Rivian taking a chunk out of Jeep’s business. Or Ford emerging from the shift from the internal combustion engine (ICE) to the electric motor with a tighter grasp on the global truck market. Or ChargePoint expanding its footprint across North America and Europe.

No matter how good a company’s prospects look, the reality is that no one knows exactly which of them will emerge victorious, how long it will take for EVs to surpass ICE vehicles, or if other transportation fuels like compressed natural gas and hydrogen will also take large shares out of the commercial- and passenger-vehicle markets. Therefore, the best choice for most investors is probably to compile a basket of EV stocks. That way, diversification reduces risk without compromising the chance for upside if a single company proves to be a long-term winner.


Read More: Lucid, Rivian, and Tesla Are Just the Tip of the EV Stock Iceberg | The Motley Fool

2021 was another successful year for journalism’s unionization movement – Poynter

Labor discount plan to bring down cost of electric cars to…