Due to its neck-snapping performance, aided by the instant thrust, the Tesla Model S Plaid has become a regular at the drag strip.
We’ve seen it take on some of the quickest cars on Earth and come out on top (mostly), but how does it stack up against the Dodge Challenger SRT Hellcat? Some might argue that the muscle car cannot possibly win, as it has ‘only’ 707 horsepower and 650 pound-feet (881 Nm) of torque produced by the supercharged 6.2-liter V8.

However, the one depicted on video is said to boast no less than 1,000 hp from its tuned engine, so it can probably hit the 60 mph (97 kph) mark in less than 3 seconds, considering that the stock Hellcat, which maxes out at 199 mph (320 kph), needs a bit over 3 seconds for it.

As for the Tesla Model S Plaid, it sits in a superior league. It may not be the fastest production car down the quarter-mile anymore, as that title is held by the Rimac Nevera, but you are looking at a vehicle capable of completing it in a hair over 9 seconds. It can also deal with the 0 to 60 mph (0-97 kph) acceleration in 1.99 seconds, yet with a little bit of prepping and a special resin covering the asphalt.

To settle the dispute, the Challenger SRT Hellcat and Model S Plaid were subjected to a half-mile race from a 40 mph (65 kph) rolling start. Toward the end of the sprint, the electric super sedan reached its top speed, so did the Dodge use that to its advantage, scoring one for the ICE squad, or was the Tesla simply too far ahead? Only one way to find out, and if you still cannot tell, then the video’s description answers the question. 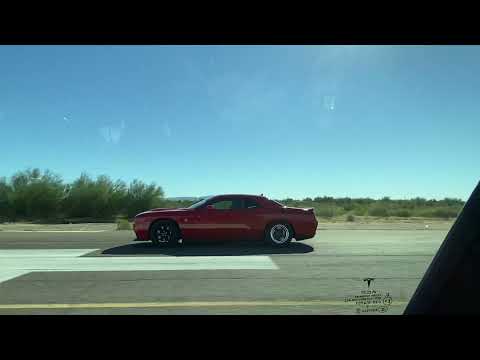 The real reason why electric cars are so fast | Know It All with Jason Cammisa | Ep. 01