December has so far been a wild month as the major indices routinely make big moves each day. While some stocks are hovering around their all-time highs, many growth stocks are actually down a lot for the year, and some are close to their 52-week lows.

Lucid Group (NASDAQ:LCID), Rivian Automotive (NASDAQ:RIVN), Nio (NYSE:NIO), and Tesla (NASDAQ:TSLA) are four high-profile electric vehicle (EV) stocks that are all down 25% or more from their highs. Here’s the lowdown on each, as well as the best one to buy now. 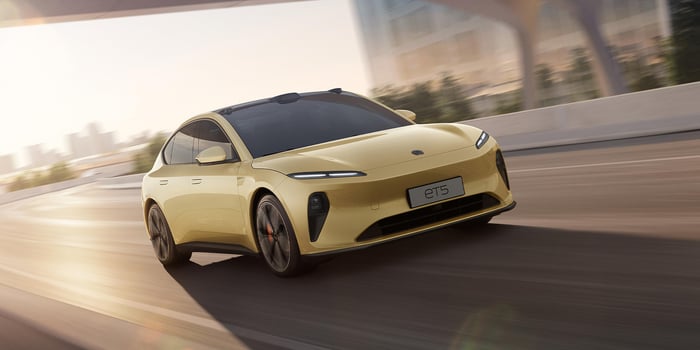 Lucid has some serious upside

Share prices of Lucid Group are down 38% from their high as the up-and-coming electric sedan company faces what should be a challenging 2022. Lucid delivered on its promises in 2021 by expanding its manufacturing facility, going public and raising cash, entering mass production, and starting customer deliveries. Yet recent events, most notably a U.S. Securities and Exchange Commission (SEC) request for documents that was issued on Dec. 3 and a controversial senior note offering, have taken a toll on Lucid stock of late.

Despite the bad press, there’s reason to believe Lucid could be a great stock to own over the long term. The timing of the senior note offering was fantastic for Lucid, which valued its stock at $54.78 per share (a 37% premium to its share price at the time of this writing). It also gives the company the cash needed to accelerate production, expand manufacturing capacity, and meet a customer demand that currently sits at over 17,000 reservations. Given its incredible battery technology, Lucid could become a staple in the luxury sedan market over time.

Rivian has seen its stock sink as the honeymoon period after its initial public offering (IPO) draws to a close. In fact, Rivian’s share price fell over 10% on Dec. 17 after the company reported its Q3 2021 earnings, which was its first report as a public company. Lower-than-expected customer deliveries, wider-than-expected losses, and the harsh reality that it’s going to take a lot of money to grow its manufacturing and charging network to the size Rivian hopes added up to an overall disappointing quarter. However, Rivian’s reservation numbers are growing at a breakneck pace — quite a bit faster than Lucid’s, in fact. However, until Rivian is able to set goals and then meet or exceed them, it’s hard to trust the company’s trajectory, let alone value Rivian at $86 billion.

Down but not out

No stock on this list is further off its high than Chinese automaker Nio, which got gut-punched with a 55% drawdown and is now hovering right around its 52-week low. 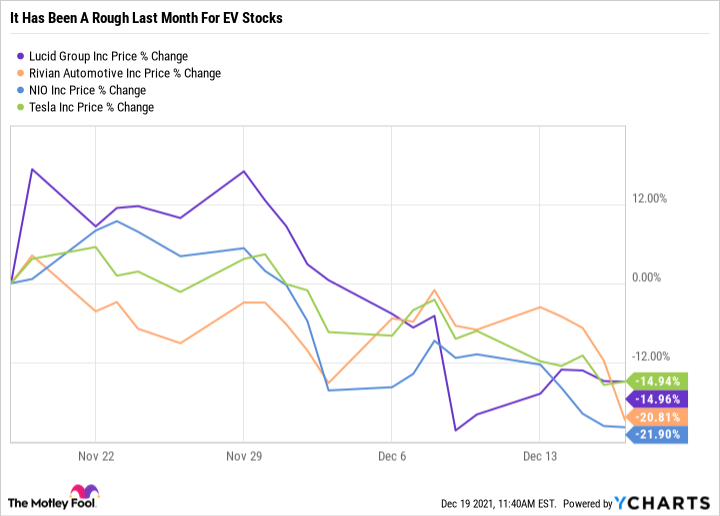 It wasn’t long ago that Nio was getting the same buzz Lucid and Rivian have received the last few months. But lately, it’s found itself outside the limelight, or briefly in it for negative reasons.

Nio has been mass-producing electric cars for a few years now and is becoming an established player in the space. Chinese regulatory pressure, inconsistent production numbers, and an uncertain growth plan in Europe are all headwinds facing Nio right now. What’s more, the SEC is tightening its grip on foreign companies like Nio.

However, Nio held its highly anticipated Nio Day on Dec. 18, unveiling its new ET5 midsize sedan and making various announcements. Nio is showing no shortage of innovation and could be a great long-term winner.

Firing on all electric motors

Tesla is down “just” 25% from its high as investors grapple with valuation concerns for many growth stocks. Tesla isn’t the same unprofitable and streaky company it once was, but it is priced to perfection at a 22.5 price-to-sales (P/S) ratio and a 301.8 price-to-earnings (P/E) ratio.

Despite the sky-high valuation, there’s a lot to like about Tesla the company. Its industry-leading operating margin, impressive growth, diverse business, and market-leading position in the growing EV industry are reasons to like the company for years to come.

Two ways to approach the sell-off in top-tier EV stocks are the basket strategy and the wait-and-see strategy. Investing in, say, a 50/50 split of Lucid and Tesla, or even an equal split of all four companies on this list, gives exposure to multiple aspects of the market while limiting the damage any single company can inflict on your portfolio.

However, there’s a good chance that we are years away from consistent profitability from Lucid, Rivian, or Nio. For many investors, simply waiting for the EV space to mature and then picking a winner may leave some money on the table, but it could be a safer and still rewarding bet.

22 of the most anticipated electric vehicles coming in 2022