Thanks to Ford’s Pro Power Onboard system, the 2022 F-150 Lightning, the all-electric version of the United States’ best-selling pickup truck, owners will now have the ability to share range with other EVs.

The feature is exclusive to the Ford F-150 Lightning and F-150 PowerBoost Hybrid, which both equip Pro Power Onboard. The feature essentially turns the vehicles into mobile charging stations for other EVs, as the onboard generators and high-capacity battery systems holding the charge can now give other cars additional range by simply plugging into the host vehicle. It’s not just exclusive for Ford, either, as the company stated in a press release announcing the feature that electric vehicles built by other manufacturers would also benefit from the feature. 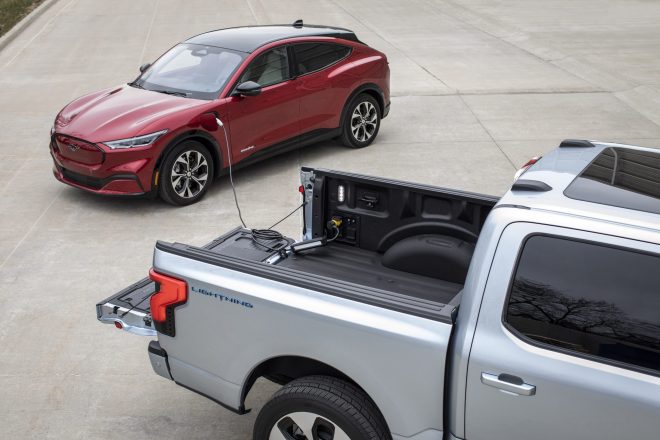 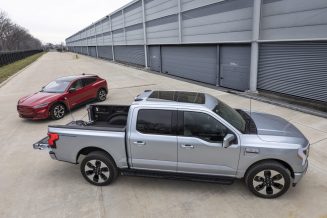 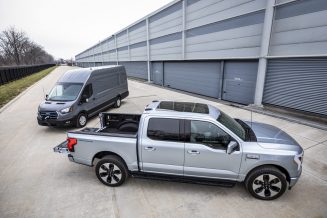 The process is simple: Connect to an F-150 Lightning or F-150 PowerBoost Hybrid with the optional 9.6 or 7.2 kilowatt Pro Power Onboard feature. By using Ford’s Mobile Power Cord, the vehicle can deliver a Level-2 charging rate that will add an estimated 20 miles of range per hour. This figure was obtained by testing the feature with the Mustang Mach-E, Ford says. The Mach-E that was used to assess the performance of Pro Power Onboard equipped an extended-range battery and rear-wheel-drive. When using the feature with an F-150 Lightning, 13 miles of range was added. 10 additional miles were recorded in an hour with the Ford E-Transit low-roof cargo van. While this doesn’t sound like much, EV charging stations are becoming more available with every passing day. Even a quick charge of 45 minutes would likely get most people with completely depleted vehicles enough range to make it to their closest charging station.

Ford details more about the process for charging vehicles with Pro Power Onboard:

“Customers can easily take advantage of this capability, using a widely available power adaptor to link the Ford Mobile Power Cord to their truck. Once connected to the 240-volt Pro Power Onboard outlet, customers can use the Mobile Power Cord to charge a range of all-electric vehicles that use the SAE J1772 charge port. This includes the Ford Mustang Mach-E, the Ford E-Transit electric van and the all-new 2022 Ford F-150 Lightning electric pickup, as well as vehicles from other manufacturers.”

The F-150 Lightning’s versatility as a power source opens the door for the vehicle to do more than just give owners a sustainable pickup. Ford’s Intelligent Backup Power could also be used to bring lights back on inside a home, essentially acting as an energy storage device.

“There are so many new opportunities to innovate with features and functions made possible only through electrification,” Patrick Soderborg, Ford E-Powertrain Systems Engineer, said. “This really hit home during the Texas power crisis last February, which left millions in the cold. F-150 Hybrid helped many Texans keep warm and powered up during those difficult times thanks to Pro Power Onboard – and we’re trying to do even more with F-150 Lightning.”

The American EV boom is about to begin. Does the US have the power to charge it?

Minnesota ramps up electric vehicle charging stations across the state

‘It is a no-brainer’: State funds sought for electric vehicle investment…

Wanderport Corp. (OTCMKTS: WDRP) Breaking Out as Co Announces its Moving into EV’s…