As more and more Israelis switch to electric vehicles, many of them are left with a singularly un-shocking problem — they have nowhere to charge their cars.

Battery-powered vehicles occupy a small but growing share of the Israeli roads. Encouraged by tax incentives, relative cost of fuel, environmental consciousness, and the allure of current offerings, both hybrid and full electric vehicle (EV) ownership has grown three- to fourfold in the five years from 2016 to 2020.

Charging infrastructure, however, hasn’t kept up with demand. Though there are about 234,000 chargeable vehicles on the road, Israel only has 1,000 charging sockets currently deployed for the plug-in public. And while the government is responding, vehicle owners have devised quintessentially Israeli workarounds to close the gap.

But now EVs, while currently representing a paltry 1 percent of Israel’s 3.7 million-strong vehicle fleet, are being adopted at an especially breakneck pace. In the past year, EV adoption has more than quadrupled, from 1,900 purchased last year to more than 7,800 vehicles imported in the first three quarters of 2021 alone. The Transportation Ministry logged 9,000 EVs currently on the road, and Israel is on pace to double that next year.

Home charging, via the the living room

Unlike a traditional gasoline or diesel-based vehicle, an EV relies exclusively on its battery, which is charged by connection to a specialized power outlet. Hybrids can toggle between battery and internal combustion engine power, but require plug-in charging to fully utilize their batteries. And unlike refilling at a fuel station, which takes a matter of minutes, charging is a time investment. Owners of Teslas — Israel’s current market-leading EVs, representing about 60% of 2021 imports — say the process can take from “a few hours to top off” to “overnight, for a full charge” on AC power.

According to an Energy Ministry consumer survey conducted in 2018, one of the biggest barriers to Israelis’ widescale adoption of EVs is that “charging stations need to be available in home parking and public places.” The Energy Ministry, rather than the Transportation Ministry, is taking the lead on planning for Israel’s EV adoption.

While installing an at-home charging station would be the most convenient option, it requires control over a private parking space. But, many of Israel’s urban dwellers have a parking problem. For example, Tel Aviv has only 130,000 privately held home parking spaces for a population of over 460,000, and parking in the city is notoriously difficult.

However, some intrepid city-dwellers have been undaunted in their quest to own a battery-powered vehicle, devising creative solutions to jury-rig home-style charging in an informal manner.

Throughout Tel Aviv, thick cables dangle from apartment windows, connected to cars below in shared or street parking. Facebook groups for Israel-based Tesla Model 3 owners field scores of questions about how to recreate a home parking experience without home parking.

Tesla owner Sharon B. rents a private home, but without private parking, in Ramat Gan, an urban area bordering Tel Aviv. He parks his Tesla on the street, and constructed a device to jump a cable from inside his home, suspended above the sidewalk, down to the street to charge his car. The apparatus, as seen in a video provided by Sharon, is reminiscent of a Rube Goldberg machine.

“It’s a metal arm that swings out high over the sidewalk, without bothering pedestrians, and can connect my car to charging,” Sharon said. “I actually constructed it from a sun umbrella. I deconstructed one and used the folding arm to extend a cable from my yard above the sidewalk, so people can go under it without a problem.”

He connected this to a newly installed three-phase AC outlet, to provide “the fastest charge you can get at home.” DC power, which is significantly faster, is only available with a permanent charging station.

And, as a final, crucial step, Sharon “installed a security camera,” which he watches to see when that parking spot is vacated, so he can move his car into it and charge.

Sharon declined to be identified by his last name because his charging setup has not been formally approved by the Ramat Gan Municipality.

“This is classic Israel. I’m using an extension cord from my living room to charge my 200,000 shekel car,” a Tel Aviv-based hybrid owner, who similarly did not want to be named, commented.

“Welcome to Make-it-Work Nation,” she laughed.

Until 2023, Israel plans to tax EVs at a significantly lower rate than regular vehicles, at 10% and 83%, respectively.

Sharon quotes his average at-home charging cost at 8 agorot ($0.03) for a kilometer, which is very inexpensive. The current government-regulated price of gas in Israel is 6.62 shekels a liter ($8.10 a gallon), or 33 agorot ($0.11) a kilometer for a car that averages 20 kilometers a liter. This makes the current cost of home-charging an electric vehicle almost 4 times cheaper than gas.

However, charging cost jumps and convenience drops when using publicly available options, of which there is still limited supply.

In a statement, a spokesperson for the Energy Ministry said these stations would be “installed on highways, local authority areas, malls, parking lots, public centers, and workplaces,” including major malls, movie theaters, and even IKEA parking lots. 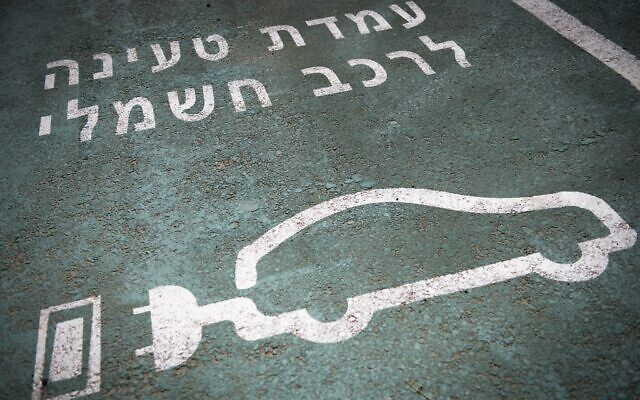 However, not all charging options are created equal. AC charging is slow, but cheaper both to install and in cost to consumer. Deployment of AC chargers will be tied to use case. More AC chargers will be at malls, movie theaters, and other destinations at which consumers might expect to spend a few hours.

DC charging can deliver range in significantly shorter periods of time. This is especially significant because EVs vary in their ability to deliver kilometers per full charge, from 300-plus to 500-plus, depending on the make and model. Fast DC chargers will be installed in gas stations and along highways, where consumers would be willing to pay more in order to have a faster experience.

Only 95 of the proposed 2,500 sockets will be fast DC charging stations and a further 111 will be ultra-fast — meaning the remainder will be slower AC power. Ultra-fast charging delivers 100 kilometers of distance in seven minutes of charging, enabling long trips across Israel, which is about 420 kilometers (260 miles) north to south.

In addition, Tesla has installed six superchargers – ultra-fast DC charging stations – around urban centers, with six currently in the works. These stations are only compatible with Tesla vehicles. 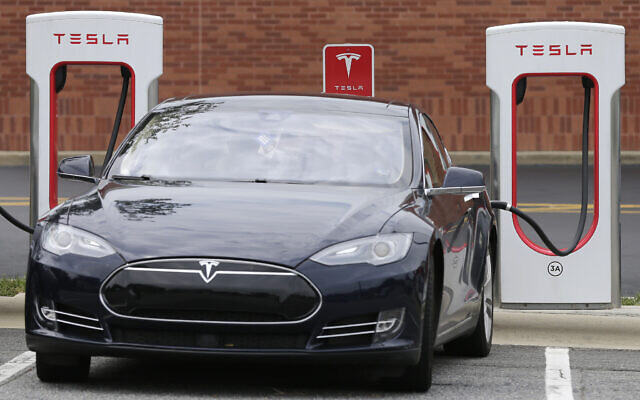 All publicly available chargers are expected to be more expensive than at-home charging, although Tesla owners report that some Tesla superchargers are temporarily free.

The Energy Ministry spokesperson added that the goal of investment in public EV charging infrastructure is to support the widespread adoption of electric and other lower-polluting fuel vehicles.

“In the transportation industry, the goal is to stop the consumption of polluting fuel products by land transport and switch to the use of electric vehicles and vehicles powered by compressed natural gas. As part of the vision, 2035 was defined as a destination where all vehicles sold in Israel will be electric or natural gas.”

In order to meet this vision, Israel will need to significantly expand its publicly available charging base. Or else, expect to see sidewalks and streets strewn with stray cables in an EV-heavy future.

Rivian, an E.V. maker with big ambitions but few sales, will build a new factory in