Market volatility is back as the major indices bob up and down and smaller companies soar and sink.

Chinese automaker Nio (NYSE:NIO) took the electric vehicle (EV) industry by storm in 2020. But this year its stock is down. Meanwhile, Tesla (NASDAQ:TSLA) has blasted past a $1 trillion valuation, and Lucid Group (NASDAQ:LCID) has a market cap of over $60 billion despite being years away from profitability. Here’s the case for buying Nio, as well as the argument for a 50/50 split between Lucid and Tesla. Let’s see which might be the better buy. 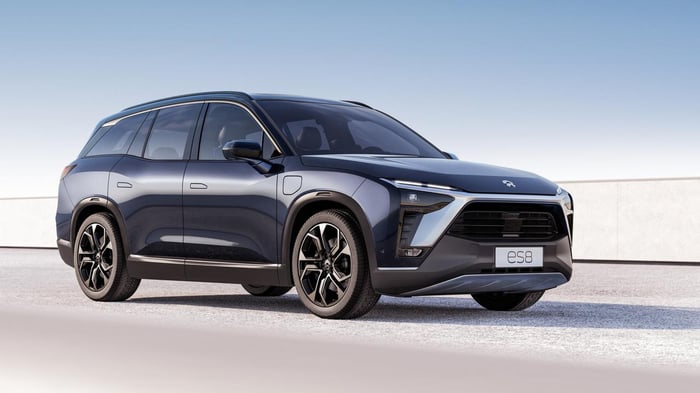 Already on a growth path

Howard Smith (Nio): Tesla has proven to be a great company and a global leader in EV sales. It built its second manufacturing facility in Shanghai for a reason, though. China is the largest automotive market in the world. The International Energy Agency (IEA) expects China and Europe to be the largest EV markets through at least 2030.

Nio already has an established customer base in its home market in China, and now it has moved into Europe, too. It started sales in Norway earlier this year, and it plans to build a community of followers there, with plans to expand into Germany next year. Its Nio House concept provides a gathering place for Nio owners similar to how Starbucks aims for its shops to be places for people to gather and work. If the concept works in Europe as well as it does in China, Nio has another tool in its belt for growth.

Of course, its products are what customers come for first. Nio offers something unique there, too. It allows customers to reduce the purchase price of a new vehicle with a battery subscription plan. Drivers don’t pay for the battery up front, and don’t need to wait for long battery charge times. Instead, a subscription allows them to use Nio’s network of battery swap stations to obtain fully charged batteries in a matter of minutes, and that brings an income stream to Nio for the life of the vehicle.

Nio just entered into an agreement with Royal Dutch Shell to jointly build and operate 100 new battery swap stations in China by 2025. The partners will begin constructing pilot stations in Europe next year.

Nio may not be nearly as big as Tesla yet, but it has delivered more than 155,000 vehicles to date. It makes sense that Tesla would be valued higher than Nio, but Lucid has barely begun delivering cars, yet has a higher market cap than Nio. Lucid doesn’t have sales results to measure yet, but according to data by YCharts, Nio has a lower forward-looking price-to-sales ratio than Tesla. 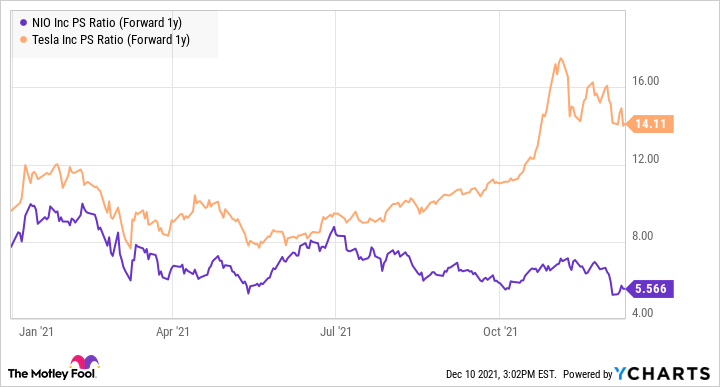 With the company expanding its production capacity and its market reach and having a lower valuation than Tesla as measured against sales, an investment in Nio may provide more reward for the risk right now.

Daniel Foelber (Lucid and Tesla): A 50/50 split between Lucid and Tesla is an intriguing proposition because it combines an exciting hyper-growth stock with today’s undisputed industry-leading EV kingpin. Lucid has hit Wall Street with shock and awe thanks to its cutting-edge technology, particularly its small yet powerful battery pack, strong demand for its cars, an impressive manufacturing facility in Arizona, and a detailed multi-year growth plan. However, the recent U.S. Securities and Exchange Commission (SEC) investigation has cast a shadow of uncertainty over Lucid.

Given third-party validation from entities like the U.S. Environmental Protection Agency (EPA) and MotorTrend, which gave Lucid its 2022 Car of the Year Award, it would stand to reason that the performance of Lucid’s vehicle isn’t in jeopardy. However, complications with Lucid’s merger with Churchill Capital IV or scrutiny over projections and estimates could endanger Lucid’s stock, as well as its credibility. Even before the news of the investigation, Lucid was an extremely volatile stock as investors attempt to value a company with negligible revenue but a lot of long-term potential.

Contrast this attractive yet speculative company with Tesla, and you have a 50/50 split that balances risk and reward. While it’s easy to point to Tesla’s $1 trillion valuation as questionable, it’s equally easy to point to its profitability as nothing short of extraordinary. Tesla has truly disrupted the personal mobility industry arguably as much as the first automobiles distributed transportation by horses. Gone are the days of Tesla struggling to produce cars on time, losing money, and teetering on the brink of bankruptcy.

The Tesla of today is one of the most profitable car companies in the world, and it is also leading the shift from the internal combustion engine to the electric motor — not to mention its growing business units in energy storage and solar power. EV industry watchers that feel as though they missed out on Tesla may be hoping that an up-and-coming player like Nio or Lucid could potentially enjoy the same success. Yet hope is a dangerous game.

Nio and Lucid are far from achieving the scale and reputation to even consider either company becoming the next Tesla. For most investors, crafting a basket around their favorite electric car stocks, charging companies, and tech plays offers the best way to limit downside risk without compromising the potential of landing a potential 10-bagger.