EV stocks had a mixed outing in the week ending Dec. 10, as buying set in motion by bargain hunting after the previous week’s declines was tempered by some stock-specific negative news.

Here are the key events that happened in the EV space during the week:

In another development, Musk, who copiously uses the Twitter platform to air his views, said he is thinking of quitting his jobs to become a full-time influencer. Apparently, it was all in jest, going by the ROFL emoji he tweeted in reaction to a Reuters story on his comment being shared by another Twitter user.

An Electrek report suggested that the company has stopped taking orders for Model S and X vehicles outside North America, and deliveries in these markets are set to begin in the second-half of 2022.

On a positive note, Tesla is on the cusp of landing a $12.36 million contract to supply Model 3 vehicles to New York City.

During the week, the China Passenger Car Association reported Tesla’s China sales for November. The company sold 52,859 Giga Shanghai-made Model 3 and Model Y vehicles, down from 54,391 units sold in October. Exports from China also dipped from 40,666 units to 21,127 units.

Related Link: Why Rivian Analysts Are Largely Bullish: ‘EV Maker Could Be The One That Can Challenge Tesla’

The EV maker also announced a $1.75 billion debt offering that pressured its stock.

Among those who jumped ship are radar system engineer Eric Rogers, battery team engineer Alex Clarabut and hardware engineering manager Stephen Spiteri. The project has been a non-starter for a long time, although recent reports suggest Cupertino could launch the Apple Car sometime between 2023 and 2025.

GM Rumored to Commit EV Investment In Michigan: General Motors Corporation (NYSE: GM) is reportedly planning to plow in $3 billion to manufacture EVs  and battery-cells in Detroit and Lansing.

The company also announced a long-term agreement with MP Materials for the supply of rare earth materials, alloys and finished magnets for electric motors.

Nio Day On Track: Quelling speculation over a potential delay in the Nio Day event amid the COVID-19 variant threat, Nio, Inc. (NYSE: NIO) F) has reportedly stopped taking orders for its F-150 Lightning pickup truck. The company has collected 200,000 refundable $100 deposits since May, when the truck was unveiled. The company is preparing to open its order book for the truck next month.

The move comes at a time the company is making a big push to make a mark in the highly-competitive Chinese market. 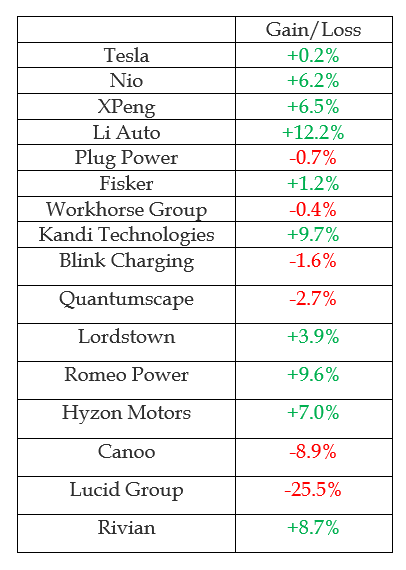 Related Link: Tesla Vs. Rivian Vs. Lucid Vs. Fisker Vs. Lordstown Vs. Canoo: How BofA Says The EV Makers Stack Up

Living on Earth: Putting Coal Miners Back to Work

GM Shares Have Been Hammered, Which Makes Owning a Piece of Its EV Future a Bargain

Norton Motorcycles Is Back