EV stocks were swathed in a sea of red in the week ending Dec. 3, with the Omicron variant threat and fears concerning a potential delisting of Chinese EV makers responsible for much of the weakness. The sell-off in the U.S.-listed Chinese EV stocks came despite the companies churning out encouraging November delivery numbers.

Here are the key events that happened in the EV space during the week:

Tesla Amid A Slew Of News Flow Tesla CEO Elon Musk resumed stock sales this week. He exercised options to sell an incremental 934,091 shares of the EV maker, raising $1.01 billion. Since Nov. 8, Musk has sold shares worth $10.9 billion, in line with the verdict of his Twitter followers who voted in support of a 10% liquidation of his stake.

Tesla also officially filed with the SEC to move its headquarters to Texas.

In another noteworthy development, Musk suggested through a tweet that he will likely take part in the company’s earnings call to shed light on Tesla’s product roadmap. Musk has previously stayed away from third-quarter earnings calls.

Musk also confirmed through a series of tweets that the initial production of the long-awaited Cybertruck will have four motors, which will allow it to turn like a tank. The Cybertruck will also have rear-wheel steering and be able to “drive diagonally like a crab” by turning all four wheels in the same direction.

Also, this week, a Tesla app update indicated that the company could soon roll out vehicle sharing. The company has been planning for vehicle sharing for a while and this would allow Tesla owners to loan out their cars for a reasonable amount of money.

The end of the week also fetched a negative headline for Tesla, when Chinese regulators announced the company has filed for recalling 21,599 units of Model Y vehicles manufactured at its Giga Shanghai plant that had issues with front and rear steering knuckles.

Chinese EV Trio Deliver: The week also saw Chinese EV makers reporting stellar delivery statistics for November. XPeng, Inc. (NYSE: XPEV) was the star of the show, as it reported record monthly deliveries that were higher than its two competitors that make up of the U.S.-listed Chinese EV trio.

“”By leveraging AWS, and building a central data lake to interconnect Rivian’s operations, products, and services, we can enable proactive diagnostics and add intelligence to our vehicles, and then use what we learn to generate synergies and scale efficiencies,” said Rivian Vice President of Software Development Wassym Bensaid. 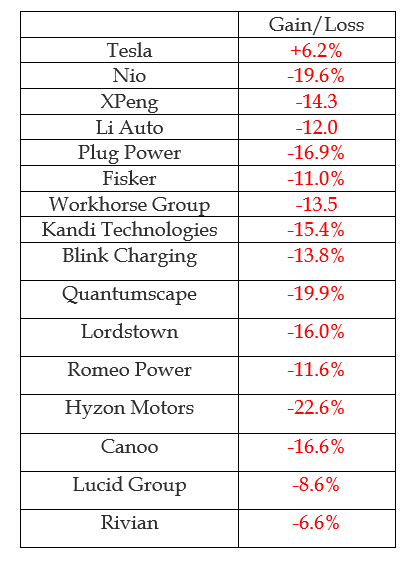