The new 2022 Polestar 2 Dual Motor was already rated by the U.S. Environmental Protection Agency (EPA) and received a 7% better range (249 miles/401 km) than the launch edition – partially it might be related to the switch to 19″ wheels as standard and 5-cycle EPA test (vs. 2-cycle previously).

Today, we will take a look at the new, entry-level Polestar 2 Single Motor (called also Long Range Single Motor or LR SM), which has been recently rated at 270 miles (434 km) of EPA Combined range.

The result is slightly better than initially anticipated – the manufacturer estimated 265 miles (426 km) – and 21 miles or 8.4% better than the Dual Motor version. 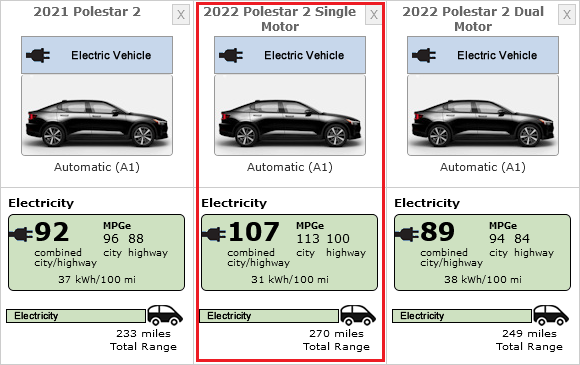 Unfortunately, we must complain about the EPA, as its documents no longer show the City and Highway range ratings for new cars (2022 model year).

Here is a quick look at the two currently available Polestar 2 versions in the U.S. The Single Motor version is noticeably less expensive and offers higher range, as well as uses a fifth less energy.

However, the single 170 kW in the front instead of two 150 kW, means that the acceleration and top speed as well as traction is significantly affected.

ELECTRIC CARS | How They Work