EV stocks were mostly lower in the holiday-shortened week ending Nov. 26, with much of the weakness attributed to the late-week across-the-market sell-off due to fears over a “more serious” COVID-19 variant strain originating in South Africa.

U.S.-listed Chinese EV startups however, managed to carve out gains for the week.

Tesla: More Price Hikes, ARK’s Continued Selling, Model S Plaid To Come To China: Supply chain shocks led Tesla, Inc. (NASDAQ: TSLA) to raise prices of its vehicles yet again. The company increased prices of rear-wheel-drive Model 3 and Model Y in China, while it also announced an increase in the prices for both vehicles in Canada.

The price hikes were reportedly intended to bring about an equilibrium in the demand-supply scenario, which was skewing in favor of the former due to component and chip shortages.

Cathie Wood’s Ark Invest continued to offload positions in Tesla shares this week. Until Wednesday, funds managed by Ark liquidated 317,272 shares in the company. Wood had previously said selling Tesla shares meant trimming positions for one purpose or another, and not complete liquidation.

Musk confirmed through a tweet this week that Tesla’s high-end Model S Plaid might land in China by March of 2022.

In another interesting turn of events, Tesla withdrew its application for availing $1.3 billion in German government subsidies for its planned battery production at its Giga Berlin.

Nio ET7 Rumor Support Stock: Shares of Nio, Inc. saw a nice bump up early in the week after reports suggested the company might begin taking orders for its ET7 sedan in January and deliveries could begin as early as the end of the first quarter.

The company nurtures ambition to be a truly global player. VP and Chairman Brian Gu said in an interview this week that the company hopes to export about half of its vehicle production.

Rivian’s R1S SUV To Be Delayed? The high-flying Rivian Automotive, Inc. (RIVN) shares retreated from stratospheric levels seen in the aftermath of its massive initial public offering. Fears of unsustainable valuation prompted some investors to hit the sell button.

The company, meanwhile, has reportedly notified its customers that deliveries of its R1S SUVs, originally slated for January, will now be delayed. Rivian now hopes to deliver the vehicle between May and July at the earliest.

EVs Take The Spotlight In The LA Auto Show : The Los Angeles Auto Show is back this year and is being held Nov. 19-28. The annual event, which was shelved last year due to COVID-19, provides a platform for new vehicle launches and unveils of concept cars. This time around, the spotlight has been on EVs, and the noteworthy ones on display at the show are Subaru’s Solterra small SUV, Hyundai Motor Company’s (PNK: HYMTF) SEVEN SUV and Nissan Motor Co., Ltd.’s (PNK: NSANY) Ariya. 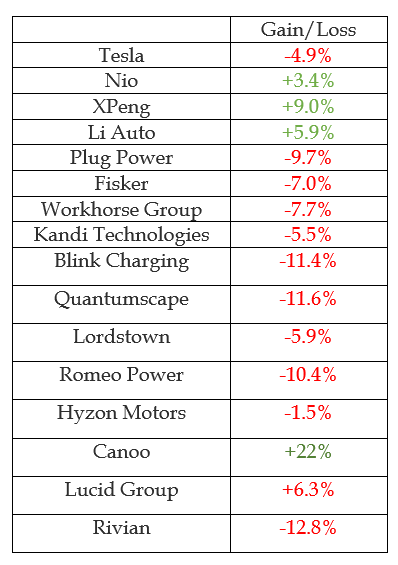 Consumers are open to electric vehicles, but face a steep learning curve

Is India In The Throes Of A Boom in Mass-Market EVs?