Long before Rivian was even a thing, the Blue Oval and General Motors offered two electric pickups. The Ford Motor Company’s zero-emission truck came out in 1997 for the 1998 model year in the guise of the Ranger EV, an RWD truck originally offered with lead-acid batteries.
Ford updated the Ranger EV to the nickel-metal-hydride chemistry for the 1999 model year, and through 2002, approximately 1,500 trucks were produced. The NiMH battery was rated at 26 kWh, translating to 82 miles (132 kilometers) of driving range. The Dacia Spring, which is the most affordable electric vehicle in Europe right now, levels up to 27.4 kWh and as many as 230 kilometers (143 miles) on the WLTP combined test cycle.

Following the Ranger EV and the appalling Focus Electric produced from 2011 to 2018, the Blue Oval started taking electric vehicles a little more seriously with the Mustang Mach-E. The crossover will be joined by a half-ton pickup next year, the F-150 Lightning that comes with dual-motor AWD from the get-go for the extremely reasonable price of $40k sans incentives.

With Chevrolet, GMC, Ram, and Tesla gunning for the same customers with their upcoming pickups, it’s obvious that everyone in the truck-making industry will start electrifying mid-size models in the near future.

Enter the all-new Ranger, which is due to enter production in 2022 as a 2023 model. Based on the T6.2 platform that also underpins the Bronco, it’s only a matter of time until the Ford Motor Company will present customers with a hybrid option or a plug-in hybrid (or both). Pixel artist SRK Designs took these outcomes to the next level by grafting F-150 Lightning cues to the Ranger, including a charging port on the right front fender. The LEDs on the front grille’s accent bar and the closed-off front grille surely bring the point home, along with the aero-focused wheels of the full-size workhorse.

As to when the Ranger Lightning will become reality, it’s pretty hard to guesstimate with the information available right now. But still, we do know that FoMoCo is working on two new platforms – the unibody GE2 and body-on-frame TE1 – for next-generation electric vehicles. A Ranger-like silhouette was shown earlier this year at the Delivering Ford+ presentation, which is our best clue yet that an electric Ranger is on the horizon. 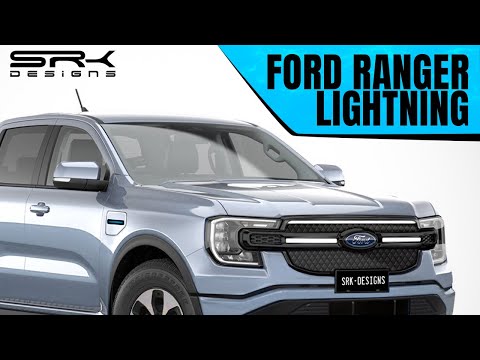